Taylor received the Robert Mufson Sportsmanship Award in Boca Hoops today. He is great basketball player, but an even better kid. The description of the award is a pretty good picture of Taylor as a an athlete–he really loves the thinking part of the games as well as helping everyone on the team succeed.

Here is the description from the Boca Hoops website:

The Robert Mufson Sportsmanship Award is to be given to one player from each team. This player has shown the courage to be themselves. They have shown their love for the “game of basketball”, and have balanced the desire to win, with the enjoyment of playing the game. This player does not have to be the special athlete but rather a special person who understands the meaning of sportsmanship. A player who truly cares about others, such as players, either teammates or opponents, coaches, referees, and parents.

This award is a landmark in Boca Hoops tradition by recognizing a quality in our children other than pure athleticism.

Taylor and Tucker are taking part in the closing ceremonies of Boca Hoops for the 2014 season today. They have had a really good season and the league does a really good job with the “Finals.” There is a sportsmanship award given to a member of each team in the league and the championship game of each age division is played immediately after the awards ceremony. It will be a full day of Boca Hoops…oh, and of course some college football mixed in for good measure!

Back on track. Wainwright with a great outing. His third win of the season.

One of my favorite days of the year! The Masters starts today! #pga #masters #hellofriends

Got some tough games ahead, though. Need to get some much need rest on this bye week.

Kelvin Taylor, Florida RB from Glades Day School, right across the street from our house, played really well too! He had his first touchdown of his college career!

Best of of both worlds! Local kid does good and Mizzou win! 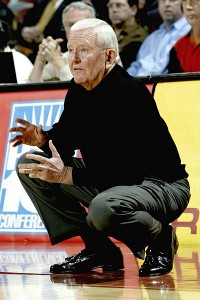 One of my favorite memories as a kid growing up was attending the Missouri State (then Southwest Missouri State) University basketball games with my parents. The first coach I really “remembered” was Charlie Spoonhour, or “Spoon” as he was called. He really helped put the Bears back on the map (they had won back to back NAIA National Championships  in 1952 and 1953).

What was great about his coaching was that he always seemed to get the most out of his players and tailored his “system” around their strengths. When he was a SMS, as it was called, he had teams built on tough defense and a deliberate offensive attack while in Springfield. Then when he went to SLU and then UNLV, the up tempo talent was added to his defensive focus to have a very successful career.  This system was called “Spoonball” wherever he went–St. Louis University and then UNLV. In Springfield, the Hammons Center was affectionately called “Spoon’s Temple of Doom.”

I remember so vividly the year that we made it to the first NCAA Tournament after winning our conference. We beat Clemson in the first round, which we were a serious underdog, and then losing a heart breaker to KU on the back of Danny Manning. That would be the first of five trips to the “Big Dance” under Spoonhour, which made him a highly sought after coach at bigger schools. He moved on to bigger and better things at SLU and then UNLV.

He will certainly be missed.

Here are several articles on his passing.

I know I’m late to the party on this deal, but my alma mater, Missouri State University BEARS had a huge road win in Missouri Valley play. I love college basketball! Here is an ESPN update.